Poker Hand Ranking: How to Evaluate your Poker Hand? 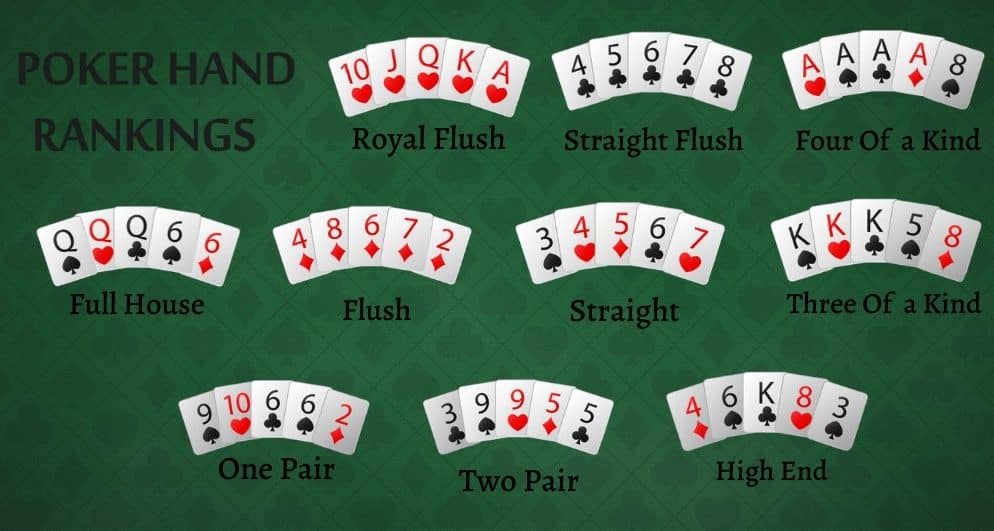 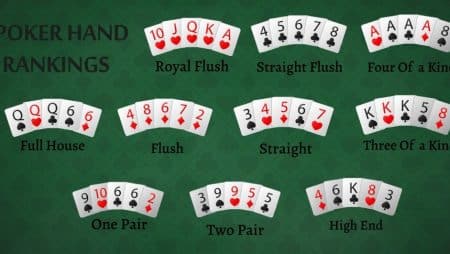 While poker has hundreds of variants like Stud poker, Texas Hold’em, Omaha, etc. the underlying poker hand ranking remains the same. The winner is determined based on the hand ranking or the strength of one’s hand.

What is a Poker hand Ranking?

Poker hand ranking is the crux of poker, which determines the strength of the hand that is dealt with. Poker involves a standard pack of 52 cards divided into four suits (spades, hearts, diamonds, and clubs.) Some versions of the game also use additional cards called jokers. In each suit, the cards are ranked from high to low; Ace being the highest in most of the poker variants while 2 is the lowest.

Typically, a poker hand constitutes of five cards, with exceptions in a few poker variants. The different card combinations make various hand ranks, which range from the highest (five of a kind) to the lowest (no pair).

How to Play Poker? & Rules for Playing

Poker is a gambling game that revolves around betting and chip management. Basically, irrespective of the different versions of the game, players are dealt with cards marking each hand or round where bets are placed. Once the bets are placed, the game is all about minimizing one’s losses when holding a poor hand, or maximizing winnings when in possession of a strong hand.

While the game sounds simple enough, it is the underlying skill that matters, which increases your chances of winning the pot. Thus, poker is rightly perceived as a game of 60% skill and 40% luck or chance.

The rules for playing poker may slightly vary depending on the poker variant. However, hand ranking rules remain the same. Thus, the player with the highest or the best hand wins the pot.

The steps involved in playing poker as follows;

Typically, the game begins with an initial contribution (ante) to the pot, which is made by each player in the form of chips or equivalent (money, favors, markers, in casual poker). The ante is called even before the dealing of the cards, depending on the version.

In each betting round after the cards are dealt, a player (usually to the left of the dealer) places a bet of one or more chips. The other players may then ‘call’ or ‘fold’; call involves putting the same number of chips (as that of the bettor) into the pot whereas ‘fold’ implies discarding the cards or getting out of the betting round until the next cards are dealt.

Note: A poker deal may have one or more betting rounds

Below is the poker hand ranking terminology starting from the strongest to the weakest hand:

1: Five of a Kind or Royal Flush

Five of a Kind is the highest-ranking card hand. It involves five cards of the same suit consisting of an Ace, a King, a Queen, a Jack, and a Ten when it is called a royal flush. There are different rankings among five of a kind based on the value or individual rank of the cards. For instance, Queens of all the suits ranks higher than 5’s of all the suits.

The next best hand is a straight flush, which includes five cards in a row and of the same suit.

It is the combination of four cards of the same rank of two or more suits.

Full house implies three cards of the same rank and a pair. For instance, three Jacks or Jokers and a pair of 5’s.

Five cards in a row, but not in a suit.

Three cards of the same ranks and two unmatched cards.

Two pairs of same ranks, and one unmatched card.

A pair of same ranks, and three unmatched cards.

No possible pairing while all five cards are of different suits and not in a row, but random.

Poker is a game of 60% skill and 40% chance. The underlying skill in winning the game revolves around minimizing your losses when dealt with a poor hand or maximizing your winnings with a good or strong hand. The luck factor comes into the picture when your opponent holds a better ranking hand.